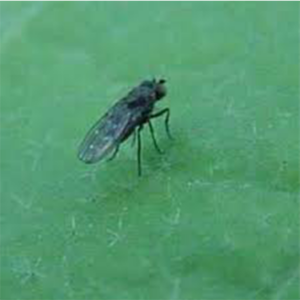 Shore Flies are usually found in wet places, and have a close association with algae. They are in the genus Scatella, which belongs to the family Ephydridae. Those found in glasshouses were mainly believed to be Scatella stagnalis, but some populations are now believed to be of S. tenuicosta.

The adult flies are black and thick bodied, with short antennae. They are easily distinguished from Fungus Gnats, which are slender and fragile in appearance, with long antennae. Whilst not causing direct damage to plants, they can cause problems for cut flower and herb growers because they mark the petals with their faeces. They also cause problems when they get caught in packaging prior to sale: neither the retailers not their customers like to see small black flies packed with their food or flowers.

The larvae are short and very leathery in appearance, with a prominent ‘breathing horn’ at the rear end. Unlike Fungus Gnats, there is no obvious black head. They are normally closely associated with the wettest areas, where algae are common.