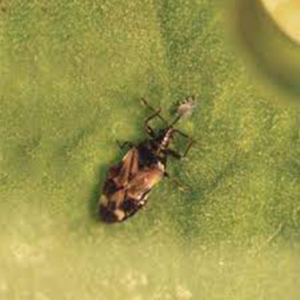 There are many different species of Psyllids (Jumping plant lice) as each species is plant specific. They are often found on fruit trees such as apples, pears and apricots. In crops such as pears they may have eight generations in one season. They can also be found on ornamental plants such as Buxus sempervirens. They are plant sucking pest that will drink from the phloem system of the plant, they will often attack the soft tissue at the growing point causing the leaves to turn yellow, distort and die back. They also produce honeydew resulting in secondary infestations of sooty moulds which can affect fruit quality and saleability.

Adults (2-3 mm long) are reddish brown in colour with transparent wings and strong jumping legs. They are very active and will hop or fly away when disturbed. Nymphs are flat and elliptical in shape, almost scale-like. They are less active than adults and are most numerous on the undersides of leaves. Newly hatched nymphs are yellowish in colour but turn green as they mature.
They over winter in the bark of the plants and emerge in early spring to mate

Antholine (Anthocoris nemoralis) realeased at the first signs of infestation in spring can give control in crops such as buxus and pears. Other generalist predators such as Ladybirds (Adaline) and Lacewings (Chrysoline) will also predate on psyllids.